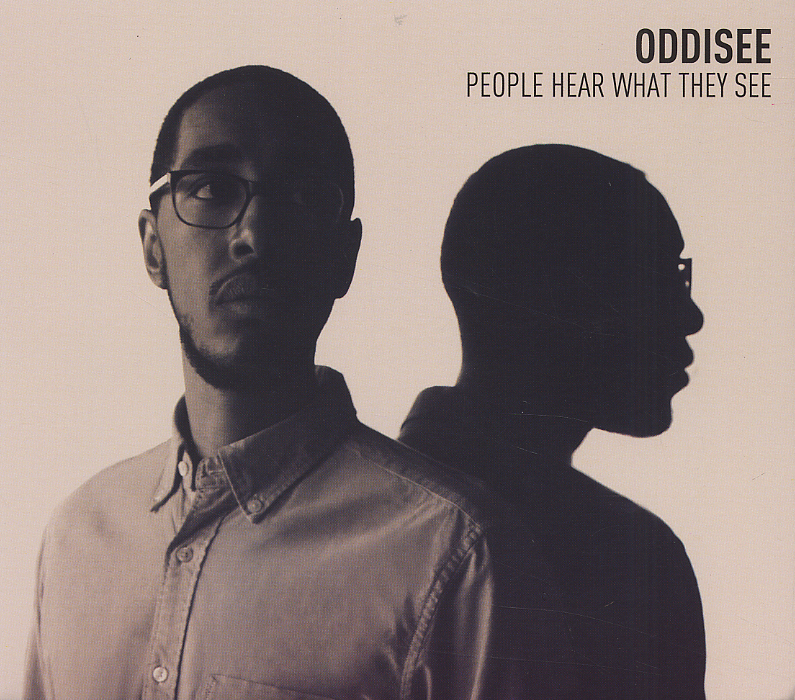 “I’m not a star, somebody lied / I ride the subway as a car, I’m getting by.” That’s Oddisee on “Do It All,” the collaborative track with his DC supergroup Diamond District, from his new album, People Hear What They See. The producer/rapper just kind of throws that line out there, subtly grounding Rick Ross’ hammy modesty with a gentlemanly dose of honesty. This is but one of People Hear What They See‘s many thoughtful takes on rap’s rote subjects. If there’s a concept to the album, it would be approaching the entry-level boasts and well, bullshit of rap, and turning them into true, lived-in representations of everyday life. “American Greed” is the “get money” song with a widescreen worldview of risk and reward, and “You Know Who You Are,” is a track for “the haters” twisted into a celebration of those who’ve supported you, and a request for introspection. These are mindful contributions to a shifting hip-hop dialogue from a doggedly underground dude not too interested in being superstar, yet well aware of the frustrating limitations and walls put up by the underground, as well.

I’m focusing on lyrics a bit here because everyone’s well-aware of Oddisee’s production chops, right? At least, they should be. Oddisee is the type of guy for whom tags like “underrated” and “slept on” have been applied so much that I’m not sure he’s even underrated anymore. One of the most impressive runs in rap as of late is Diamond District’s 2009 album In The Ruff, a nostalgic rush through New York rap with a dose of go-go swing and loose, live instrumentation; last year’s Rock Creek Park, a mostly instrumental memory stroll via old soul samples; and now People Hear What They See, a gritty hip-hop album with detours into orchestrated soul, quiet storm, and space disco. Last year, Oddisee put out a challenging Twitter rant on what’s wrong with being called “underrated”: “Reserve underrated for artists who can’t catch a break but should. Not for the successful ones you want to see bigger.” What excited fans are grasping at when they call him “underrated” though, is just a sense that Oddisee is an ambitious and singular talent who’s hard to pin down and probably suffers a bit for that. You can hear that same, invigorating sense of “is this even rap anymore?” that you hear on Kanye’s My Beautiful Dark Twisted Fantasy and El-P’s Cancer For Cure, though Oddisee’s far more restrained than either of those producer auteurs. People Hear What They See is available on iTunes since June 5th, and everywhere else since June 12, but you can stream it below right now, exclusively at SPIN.

Oddisee, born Amir Mohamed el Khalifa, is a MC/producer currently recording for Mello Music Group, splitting his time between Brooklyn; Washington, DC; and London. He was born in Washington, DC, and raised in Prince George’s County, Maryland, and his love for this area is clear in his work. As a member of the Low Budget Crew, Diamond District, and as solo artist, he has released more than ten records with various labels.

Oddisee was born in Washington, DC, and raised in Prince George’s County in Maryland by his African American mother and Sudanese father. According to a National Public Radio interview with Mohamed, Prince George’s County is one of the wealthiest African American counties in the nation but borders some of the DC area’s roughest parts. Mohamed moved to DC after high school, where he began to develop his musical sound, which has been called observational rather than angry, with a clear vision combined with soulful beats. After finding musical success and inspiration as a part of the DMV scene, he moved to the Brooklyn area for the much larger industry. He now splits his time between New York, DC, and London.

Oddisee was influenced musically at a young age by both sides of his family. From his father’s Sudanese side, he was influenced by the accomplished singers, guitarists, and poets. His mother’s side showed him gospel and bluegrass. According to Mello Music Group, he was first exposed to hip hop music by his older cousins, and it was his father who gave him his first vinyl, which influenced him to start producing. Upon graduation from high school, he moved to DC. He was all set to attend the Art Institute of Philadelphia to study visual art but was drawn to the production of hip hop and jump-started his career in music during 2002 with his production of the song “Musik Lounge” on DJ Jazzy Jeff’s Magnificent album, while he worked at A Touch of Jazz studios. However, he really began his focus on hip hop in 1999 and has worked with many successful artists including Talib Kweli, J-Live, Little Brother, and Apollo Brown.

Soon after Oddisee’s release of “Musik Lounge,” he joined a group called the Low Budget Crew, which included several other DMV artists such as Kenn Starr, Cy Young, and Kev Brown. While working with this group, Oddisee signed with Halftooth Records and released the EP Foot in the Door in 2006.

In 2008, Mohamed signed with Mello Music Group and released a series of projects over the years on which he either rhymed or produced, such as 101, Mental Liberation, Everything Changed Nothing, Odd Seasons and Traveling Man. He also created a DMV hip-hop group named Diamond District and has released several projects with them. His next studio album is set to be released on June 5, 2012, titled People Hear what they See on Mello Music Group .

Oddisee was originally influenced by his parents’ heritages, combined with a hip-hop influence from his older cousins. In an interview with NPR, Mohamed explained why he was influenced by early East Coast emcees such as Rakim and A Tribe Called Quest. He said, “These rappers don’t talk about drugs or murder, and I can relate more to their lyrics.” His lyrics have touched on a variety of subjects, which include his home town, boredom, and inequality. This is clearest in his song “I’m from PG,” which is a direct ode to his hometown. Oddisee identifies with an assortment of emcees from the District of Columbia, Virginia, and Maryland areas who share a similar sound. This area is known as the DMV. These emcees share similar determination to create original music using swinging percussion and identifiable rhythms.

His work has been used by ESPN during the NBA finals and in commercials, and in sound bites for Adult Swim, DC Shoes, and Quiksilver.Oddisee’s Odd Spring mixtape was also listed on the Washington Post’s Best Local Hip-Hop mixtapes of 2010.

Blast It Or Trash It: Vicious Cycle – You People