A Senseless Hate Crime Caught On Tape In Jackson Mississippi

Jackson, Mississippi (CNN) — On a recent Sunday morning just before dawn, two carloads of white teenagers drove to Jackson, Mississippi, on what the county district attorney says was a mission of hate: to find and hurt a black person.

In a parking lot on the western side of town they found their victim.

James Craig Anderson, a 49-year-old auto plant worker, was standing in a parking lot, near his car. The teens allegedly beat Anderson repeatedly, yelled racial epithets, including “White Power!” according to witnesses.

Hinds County District Attorney Robert Shuler Smith says a group of the teens then climbed into their large Ford F250 green pickup truck, floored the gas, and drove the truck right over Anderson, killing him instantly.

Mississippi officials say it was a racially motivated murder. What the gang of teens did not know was that a surveillance camera was focused on the parking lot that night, and many of the events, including the actual murder of Anderson, were captured live on videotape.

CNN has exclusively obtained that surveillance tape. The group of teens that night was led by 18-year-old Deryl Dedmon, Jr., of Brandon, Mississippi, according to police and officials. 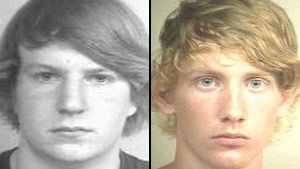 “This was a crime of hate. Dedmon murdered this man because he was black,” said Hinds County District Attorney Robert Shuler Smith. “The evidence will show that.”

Asked if there could be any doubt whether the intent was to actually hurt and kill a black person, Smith responded: “No doubt about it. They were going out to look for a black victim to assault, and in this case, even kill.”

Dedmon led and instigated the attack from early in the evening, he took part in the beating of Anderson, and Dedmon was also the actual driver of the Ford 250 truck that would serve as the murder weapon, according to officials.

As the teens were partying and drinking miles away from Jackson that night, in largely white Rankin County, Dedmon told friends they should leave, saying “let’s go fuck with some niggers,” according to law enforcement officials.

Then, the gang of teens climbed into Dedmon’s green truck and a white SUV Cherokee, and drove 16 miles down Interstate 20, to the western edge of Jackson, a predominantly black area.

The teens would have seen Anderson immediately as they exited the highway, as the parking lot where he was standing is just beside the exit ramp.

“This is the first business that you get to coming off the highway and so that was the first person that was out here and vulnerable,” said district attorney Smith.

On the videotape, obtained and reviewed by CNN, the group of teens is seen pulling into the parking lot, and stopping where Anderson is standing, though he is just off camera and not visible.

The teens can then be seen going back and forth between their cars and Anderson. Witnesses told law enforcement officials this is when the repeated beatings of Anderson took place.

Dedmon pummeled Anderson repeatedly as he crumpled to the street, according to officials, though this is not visible in the videotape. Finally, after the beating some of the teens left and some got into the green truck.

At this moment on the video, Anderson becomes visible, as he staggered into view and walked towards the headlights of the truck. The truck suddenly surges ahead, running over Anderson, then continuing at high speed away from the scene.

Shortly after he allegedly drove the truck over Anderson, Dedmon allegedly boasted and laughed about the killing, according to testimony given by some of the teens to detectives.

“I ran that nigger over,” Dedmon allegedly said in a phone conversation to the teens in the other car.

He repeated the racial language in subsequent conversations, according to the law enforcement officials.

“He was not remorseful he was laughing, laughing about the killing,” said district attorney Smith.

Later that morning, James Craig Anderson’s family learned their 49-year-old brother and son died in a hit and run. Only later, when witness statements were taken did they learn the real horror.

“It appears there is no doubt that this was a racially motivated killing,” said Winston Thompson, the attorney representing Anderson’s family. “The family is still in shock still in disbelief.”

Smith and officials in the Hinds County District Attorney’s office say they plan to indict Dedmon for murder and a hate crime.

Deryl Dedmon is thin, weighing a mere 130 pounds, and short — at 5 feet; he has straggly blond hair and piercing blue eyes.

The teen, just 18 years old, has been charged with murder and now faces a possible double life sentence. Calls to Deryl Dedmon’s attorney have gone unanswered.

During a bond hearing his attorney told the court he saw nothing to back up the “racial allegations.”

At Dedmon’s home, a girl who answered the door pretended not to know him though the pick-up truck he allegedly used as a murder weapon sticks out of the family’s garage.

Police say they returned it after the vehicle was processed. A second teen, 18-year-old John Aaron Rice, has been charged with simple assault, for his part in the beating his attorney also did not return calls.

Neither teen has entered a plea.

The other teens in the group have not been charged.

And James Craig Anderson’s family has decided to remain silent for now, trying to come to grips with a crime they thought was in Mississippi’s past: the murder of a man just because he was black.

David Banner Speaks to Big Tigger and Ms Free.  Listen to it by clicking here.

Who do you think should be charged, two people or the everybody involved?  Leave a comment below and let us know.