August 3, 2011 by lexzyne in Uncategorized 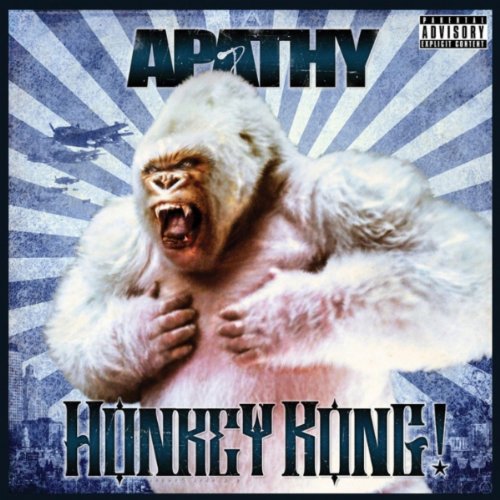 It’s probably a stretch to claim that Connecticut rap kingpin Chad Bromley b/k/a Apathy was inspired by Andrew Matson’s review from 2006, but the title of his latest album does parallel something Matson said to describe the man nicely: “He’s not an abstract rapper, form or content-wise, but offers technically flawless verses consistently delivered with the force of a guy who knows he’s the shit. He’s a mic ripper, a savage, a beast, an unstoppable force.”

Hmm. A savage, a beast, AND an unstoppable force? That certainly sounds “Honkey Kong,” matched on the album cover by a ferocious white gorilla that can only be described as Snowflake on a steroid bender. Actually the title matches two different pop culture concepts – the famous King Kong of motion picture fame, and the video game Donkey Kong, which arguably was inspired by that famous filmic icon (though the court system ultimately ruled Nintendo did not owe the owners of the King Kong rights a single dime). On the one hand the implication is that Apathy is a ferocious foe who will take your girl while simultaneously taking the rap game to new heights. On the other hand one can feel Ap’ is an exploited ape, sold to a public which fears him, while his own feelings are misunderstood or ignored. Depending on his mood Apathy is happy to portray either side of this divide, using the opening title track to showcase his unbridled rage:

Read the rest  by clicking here.