Below The Heavens Review – Again – Turn Your Speakers Way Up

November 11, 2010 by lexzyne in Uncategorized 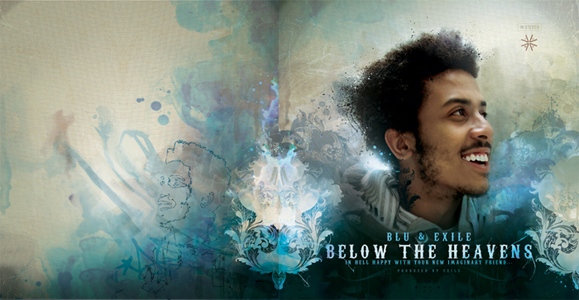 As I sat down to write this review I coincidentally got an instant message concerning this exact album I’m about to let you all know about.

random_dude: YO! Have you heard this Blu & Exile album?
shake: oddly enough I just sat down to write up this review
random_dude: That’s what’s up! I can’t believe how dope this is! Blu is so talented, I love the fact that he’s not afraid to be so personal with his rhymes.
shake: amazing emcee indeed…
random_dude: Easily one of my favorite albums of the year!

Hailing from the West Coast; emcee Blu was raised on the likes of Public Enemy and N.W.A. thanks to his father; later gravitating towards Common, Mos Def & Talib Kweli (Black Star) and Black Thought (The Roots). It’s clear that the above artists were in the 22-year-old emcee’s mental tape deck while he was perfecting his craft. Blu is an extremely talented lyricist; clever rhymes, technically sound, intensely personal and witty. Add this to the fact that the entire album is produced by Exile (one half of the slept on duo Emanon) and you are in for a rousing eargasm reminiscent of that classic 90’s sound that so many people bitch and moan about missing and saying that it’s nonexistent. It’s there (I promise) you just have to dig a bit deeper than you used to.

The album begins with The Dells-sampled “My World Is…” which acts as Blu’s chance to introduce himself properly with lines like “I don’t pack stadiums yet, I still rock em/ and they still spell my name fucked up on they flyers, it’s B-L-U/ and if you see the E, drop em/ it’s like they droppin E from the beats E is droppin/ got you peeps eavesdroppin/ and the world keeps watchin him.” Next up is the lead single, “The Narrow Path.” After giving this song a few listens I’m convinced that Blu is far beyond an artist that only has flow and hot lines. Containing one of the many sung hooks (and doing it well, unlike others you may know of … *cough* no need to name *cough*) he speaks on the struggle an artist goes through within, (“I’m trying to tell my folks that flowin ain’t easy/ I’m driving down this yellow brick road until it frees me/ I need a pen, I need a pad, I need a place to go/ to get this shit lifted up off of my soul”).

“I got a call from my girl last week/ she telling me about that time of the month, and hot it may not come/ dropped the phone right before she said we have a son/ and I started asking God ‘how come?’/ I got dreams I ain’t reached yet/ aim’s I ain’t meet yet/ when it comes to being a man, shit, I’m barely getting my feet wet/ trying to hit reset, knee deep in debt/ trying to figure out how to feed a mouth that ain’t got teeth yet.” Even if you haven’t been in that situation you can’t help but feel emotionally attached to what he is saying. That is a talent that very few artists possess. Blu’s ability to be as personal as he is with his music leaves the listener with no choice but to relate. From his struggles of holding down his family by working two jobs, lady troubles (“First Things First,” “Greater Love”); and unexpected parenthood (“Good Life,” – see above) … the confessions pour from this man’s soul and are laid beautifully over Exile’s canvas.

I can’t stress enough that Blu is talented … VERY talented. This actually becomes the ONLY thing wrong with Below the Heavens. The fact that this album is so intimate and set as an autobiographical look into a man’s struggle, there really isn’t a need for guest emcees. Case in point – the Ta’raach (together as C.R.A.C. Knucks)-featured “Juicen’ Dranks.” If I had heard this song at any other time or on another album it wouldn’t be that bad. But for this album, it sticks out like a nun wearing a mini skirt and red lip stick. And while Exile does a really nice job on the production front, it isn’t always that good. Blu definitely steals the show every time.

While “keeping it real” seems to be the “cool” thing to do with most rappers, Blu does this simply because he wants his story to be heard. Comfortable enough in his own skin, he lays it ALL out there … not just concentrating on the extremes. I still feel I haven’t done this album justice but it’s impossible to include all the gems that are pouring from my speakers without writing a ten-page review. So just know: after hearing Below the Heavens I’d be damned if anyone still spells his name wrong on the flyers…

What do/did YOU think about this album?  Leave a comment below.