August 9, 2011 by lexzyne in Uncategorized 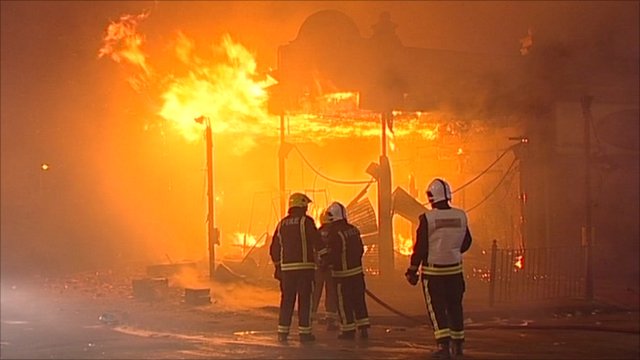 LONDON (AP) — Violence and looting spread to new areas of London on Monday — and to a second major British city — as police and politicians struggled to contain the disorder during a third day of rioting in the capital, which will host next summer’s Olympic Games.

The worst unrest in London in decades saw buildings, cars and garbage dumbs set ablaze and police officers pelted with bottles and fireworks, as groups of young people and police clashed in neighborhoods across the capital.

In the nation’s central city of Birmingham, dozens of people attacked stores in a main retail district — spreading the chaos beyond London for the first time since violence broke out on Saturday night.

As authorities struggled to keep pace with the unrest, Prime Minister David Cameron’s office said he would cut short his summer vacation and convene a meeting of the government’s crisis committee on Tuesday to lead the response to the escalating violence.

The violence began late Saturday in London’s northern Tottenham district when a peaceful protest over the police’s shooting of a suspect (Mark Duggan) turned violent, leaving parts of the high street charred and its shops looted. But some have blamed the unrest on unemployment, insensitive policing and frustration across Britain over the government’s austerity budget, which will bring deep cuts to social services and welfare payments.

On Monday evening, the rioting spread to at least four new areas of London.

In the Hackney area of east London, hundreds of youths attacked shops and set fire to cars. Thick smoke billowed from a main street in the Peckham district of south London, where a building was set ablaze along with a bus — which was not carrying passengers. Lines of cars were torched in nearby Lewisham and a building in Croydon, while police advised stores to close early in dozens of other neighborhoods.

“There is significant disorder breaking out in a number of our communities across London,” Tim Godwin, the acting London police commissioner said in response to the spiraling violence — amid some demands for police to deploy water cannons to scatter the rioters.

Godwin urged communities to help clear the streets of people, and called on families to contact their children and ensure that they were not involved in the chaos.

Home Secretary Theresa May, the Cabinet minister responsible for policing, and London Mayor Boris Johnson also cut short summer vacations in an attempt to deal with the crisis — while police confirmed they had made more than 200 arrests in London.

The rioting followed the fatal police shooting of Mark Duggan, a 29-year-old father of four, who was gunned down in disputed circumstances Thursday in Tottenham.

Many residents claimed that the looting was the work of greedy youths, aided by instant communication through SMS texts and instant messaging.

“It’s nothing to do with the man who was shot, is it?” said 37-year-old Marcia Simmons, who has lived in the diverse and gritty north London neighborhood all her life. “A lot of youths … heard there was a protest and joined in. Others used it as an opportunity to kit themselves out, didn’t they, with shoes and T-shirts and everything.”

Godwin said he had heard “lots of debate about what the various issues are that are making people commit these acts — but what I have seen is pure violence, pure gratuitous violence.”

Two police cars and a double-decker bus were set alight, stores were looted and several buildings along Tottenham’s main street — five miles (eight kilometers) from the site of the 2012 Olympics — were reduced to smoldering shells.

Police condemned the “copycat criminal” violence that began Saturday night and hit areas including the leafy suburb of Enfield, a few miles (kilometers) further north; Walthamstow in northeast London, where police said 30 youths vandalized and looted shops; and the busy shopping and tourist district at Oxford Circus, where about 50 people damaged property.

Duggan’s partner, Semone Wilson, told Channel 4 News that her fiance was not connected to gang violence and urged police to offer more information about his death. But she said the riots appeared to be no longer linked to the initial protests. “It got out of hand. It’s not connected to this any more. This is out of control,” she said.

May said 215 people had been arrested and 27 charged so far, including an 11-year-old boy accused of burglary. About 100 of those arrested were 21 or younger and 35 police officers had been injured in the violence, police said.

In the city of Birmingham, 120 miles (195 kilometers) north of London, police confirmed that officers were dealing with disorder across the city center, where shops were being vandalized.

London police issued an apology Monday over their handling of aspects of Duggan’s death, acknowledging that they had failed to inform his parents — instead dealing with two other family members. “It is clear that there are lessons that can be learned,” the police department said in a statement.

However, the rioting had “changed from a local issue into organized criminality” police deputy assistant commissioner Steve Kavanagh said Monday as he promised a “momentous investigation” to track down the perpetrators.

They were relatively small groups of youths — their heads and faces covered — who used social media such as Twitter, mobile phone text messages and instant messaging on BlackBerry cell phones to organize and keep a step ahead of police. One BlackBerry message Sunday, whose authenticity could not be verified, urged young people from across London to converge on Oxford Circus for “pure terror and havoc & free stuff.”

Once the preserve of businesspeople, BlackBerry handsets are popular with teenagers, thanks to their free, fast instant messaging system. Blackberry’s manufacturer, Research in Motion, said in a statement: “We feel for those impacted by the riots in London. We have engaged with the authorities to assist in any way we can.”

Police said they would be monitoring Twitter feeds and those who incited violence could face arrest.

In the south London neighborhood of Brixton — the scene of riots in the 1980s and 1990s — youths smashed windows, attacked a police car, set fire to garbage bins and stole video games, sportswear and other goods from stores on Sunday night.

Like Brixton, Tottenham is an impoverished area with an ethnically diverse population, a large black community and a history of unrest.

Tottenham was the site of the 1985 Broadwater Farm riots, a series of clashes that led to the fatal stabbing of a police officer and the wounding of nearly 60 others — and underscored tensions between London police and the capital’s black community.

Since then police have made concerted, and fairly successful, efforts to build better relations with London’s ethnic communities. But mistrust still lingers, and the shooting of Duggan — a popular figure in the community — has stirred old animosities.

Few details of Duggan’s death have been released, and in the void rumors have swirled.

Police say Duggan was shot dead when police from Operation Trident — the unit that investigates gun crime in the black community — stopped a cab he was riding in.

The Independent Police Complaints Commission, which is investigating the shooting, said a “non-police firearm” was recovered at the scene, and media reports said a bullet had been found in an officer’s radio.

But the Guardian newspaper reported that the bullet in the radio was police-issue, indicating Duggan may not have fired at the officer.

There are signs of rising social tensions in Britain as the government slashes 80 billion pounds ($130 billion) from public spending by 2015 to reduce the huge deficit, swollen after the country spent billions bailing out its foundering banks.

The past year has seen mass protests against the tripling of student tuition fees and cuts to public sector pensions. In November, December and March, small groups broke away from large marches in London to loot. In the most notorious episode, rioters attacked a Rolls-Royce carrying Prince Charles and his wife Camilla to a charity concert.

The full impact of spending cuts has yet to be felt, however, and the unemployment rate is stable — although it highest among youth, especially in areas like Tottenham.

Many locals dismissed socio-economic explanations for the riots.

“We are going to get people blaming the economy and what happened last week but that’s not the real reason this happened,” said Brixton resident Marilyn Moseley, 49. “It’s just an excuse for the young ones to come and rob shops.”

Mayor Johnson condemned the “utterly appalling” destruction. “People have lost their homes, businesses and livelihoods through mindless violence,” he said in a statement.

For civic leaders and Olympic organizers, the violence was an unwelcome reminder of London’s volatility, less than a year before the city hosts the 2012 Games.

The International Olympic Committee said it had confidence in British authorities.

“Security at the Olympic Games is a top priority for the IOC,” spokesman Mark Adams said. “It is, however, directly handled by the local authorities, as they know best what is appropriate and proportionate. We are confident they will do a good job in this domain.”

Images of buildings and vehicles in flames broadcast around the world were poor publicity for the city as it prepares to host the games.

“You can imagine how stretched the police would be if this were to occur during the Olympics,” said Tony Travers, a local government expert at the London School of Economics. “So I think this will create a worry within City Hall and the Home Office.”

Send help to those in Tottenham by mailing your donations here:

L.A. Riots Over Immigrants – Which Side Are You On

Did Breivik Really Act Alone In Norway… Or?
Share: