Does Your Vote REALLY Count?

November 2, 2010 by lexzyne in Uncategorized 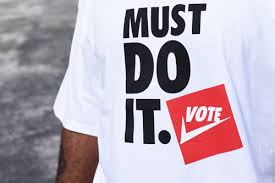 We all vote, even if you do not officially cast your ballot you are still sending a message, a vote to your country. When a person does not vote that one individual citizen does not participate with the electoral process. As with any other voter, what would happen if no one voted. Our democracy would end. Democracy by it very nature needs the participation of the people, with out that there is no democracy. When one does not cast a vote it does not mean that that voter still does not influence the election as much as any other voter. It still counts, as a vote against democracy and a vote for what ever thug want to try to rule.

Informed voters who care are the backbone of the electorate. Voters who take their time, read the issues, study the candidates and decide the faith of the nation are the one who are going to lead this nation to a higher brighter place. Those who vote out of hate, anger or ignorance will get what they vote for. When casting a vote one is becoming engaged with the people of the nation. There are several ways to approach one voting but the important thing is that voting brings about engagement, and once engaged a voter can start to learn what it mean to be a citizen of a democracy. It is only through voting that a person can learn this, and this process takes years to get a handle on.

When a citizen of a democracy is more aware of the their own feelings and wants the voting process becomes more real, a tangible way to influence the nation in which we live. The more we vote the more this becomes real and concrete. Voting loses it “what difference does one vote make.” the more one votes and participates in the leading of our nation. Informed, uninformed, old, young, and in-between voting is in itself a education, a knowledge gathering human experience. Just do it. The more a voter cast their vote the more the significance of voting becomes. Go to the poll and vote and the process takes over. We are all being human when we desire to vote. It is a very human solution to a complicated system of rules and processes. Voting is the most important thing a citizen will do as a citizen of a democratic country.

It is an imperfect system with flaws and imperfections. It will always be imperfect. Voting is not a precise science, it is an intellectual, emotional event that takes participation to experience. All the yelling at a television set will not change on thing in this nation. It is in the action of going to the polls, mailing in the ballot, and waiting for the results that make the experience worthwhile, and also builds a nation and leads it to what is best for the people. And only the people can decide make voting important.

Make A Difference With Your Position Don’t Just Play It

There is one comment on Does Your Vote REALLY Count?