Chief Keef Misinterprets The Meaning And Threats Get To Lupe Fiasco

September 6, 2012 by lexzyne in Uncategorized 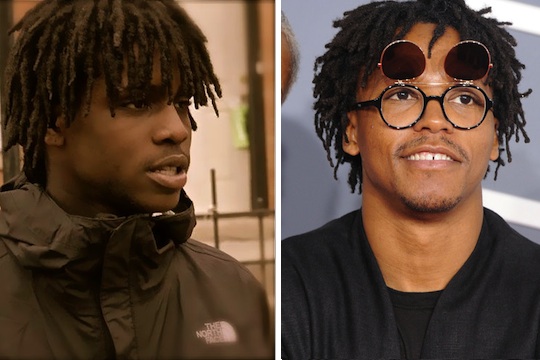 Yesterday, Lupe Fiasco announced via his twitter page that he may be done with rap after a small spat with fellow hometown rapper Chief Keef.  You see, there were more than 152 killings in Chicago between June and the end of August alone this year with 38 of them being teenagers, and unfortunately up and comer Chief Keef (who’s only 17) glorifies that ‘Bang Bang’ lifestyle.  If you follow, Chief Keef on twitter, he tweets with the hashtag 300 which is a reference to the Chicago Street gang, the Black Disciples.  Police started monitoring Chief’s account earlier this week after another 16 year old rapper (by the name of Lil Jojo)  was killed in Chicago that had a known beef with the street gang and to make matters a little worse, Chief Keef sent out an unsympathetic tweet after the rapper was shot to death that read, ‘Its Sad Cuz Dat Ni–a Jojo Wanted To Be Jus Like Us #LMAO‘. [As in ‘Laughing My Ass Off’.]

But it didn’t stop there. A day after Lil Jojo’s murder, Chief Keef also sent a threat to Lupe Fiasco via Twitter:

Chief Keef was more than likely responding to a comment that Lupe made last week during an interview with Baltimore’s 92Q. When Lupe was asked for his opinion on Chief Keef, he responded, “Chief Keef scares me. Not him specifically, but just the culture that he represents–specifically in Chicago…. The hoodlums, the gangsters, and the ones you see killing each other and the murder rate in Chicago is skyrocketing and you see who’s doing it and perpetrating it — they all look like Chief Keef.”

Lupe responded to Chief Keef’s threatening tweet by stating he… Read the rest by clicking here.

50 Cent Gets WorldStarHipHop Shut Down?

Ice-T Not On Board With Today’s Average Hip Hop

10 Rappers Who Got Screwed By Their Record Labels