25 Years Of Def Jam: How The Sound Of New York Came To Rule The World

September 4, 2011 by lexzyne in Uncategorized 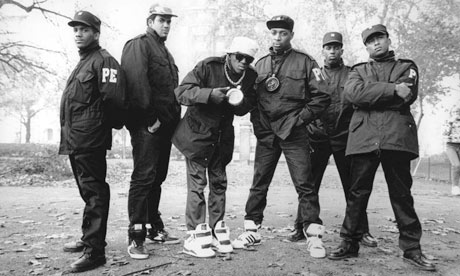 Public Enemy, hip-hop’s most thrilling and innovative group and an early signing to Def Jam, in London’s Hyde Park in 1987. Photograph: David Corio/Redferns

‘Without hip-hop we wouldn’t have Obama,” says Russell Simmons, co-founder of Def Jam Recordings, media mogul and the original template for every entrepreneur on Forbes magazine’s now annual “hip-hop rich list”. There’s plenty of truth in his words.

Back in April 2008 while still on the campaign trail, Barack Obama famously dismissed criticism from Hillary Clinton by brushing specks of imaginary dirt off each shoulder. Pundits applauded his ability to rise above the mud-slinging without even saying a word. But for a different audience, weaned on hip-hop, there was a second meaning: Obama was deliberately mimicking dance moves from the video to Jay-Z’s 2004 hit “Dirt Off Your Shoulder”. Here was a potential president who at least spoke their language. Simmons adds: “It’s not just black kids. White kids who grew up on hip-hop have progressive politics. Hip-hop influenced a generation who helped put Obama in the White House.”

Def Jam influenced that generation more than any other label. The standard view, that it’s hip-hop’s equivalent of Motown, doesn’t quite do justice to the company’s achievements. Which is something anyone flicking through its official history, Def Jam Recordings: The First 25 Years of the Last Great Record Label, published this month, will quickly realise.

Although not the only label to export the music and culture of inner-city America to the world, Def Jam is the most significant, artistically and commercially. Key signings have altered the art form, among them LL Cool J, Public Enemy, Beastie Boys, Jay-Z and Kanye West. And in 1999, when Simmons sold his remaining 40% share of the company to Universal, it was worth £135m.

Def Jam was founded in 1984, by which time Simmons was already a manager and promoter, steering the careers of rap’s breakout solo star Kurtis Blow as well as the charismatic trio that featured Simmons’s brother Joseph, Run-DMC. Growing up in Hollis, in the New York borough of Queens, Simmons had run with gangs and sold drugs as a youngster, although not on any significant level. He remained close enough to the street to be in exactly the right place as hip-hop emerged. Falling in with Rick Rubin, who became his Def Jam co-founder, made for the the oddest of couples.

A 21-year-old aspiring record producer from the Long Island suburbs, Rubin was keen on all things confrontational and loud, be it punk, metal or rap. Still a student at NYU, he received demos in the post and held meetings with emerging talent such as a teenage LL Cool J in his student digs.

Rubin and Simmons were outsiders and happy to be so. An early interview with record industry bible Billboard, quoted in the book, has Simmons declaring that he would be releasing records that “nobody would distribute but us”. Today he credits the more arty, downtown Manhattan scenes with giving him more early support than mainstream black music business, then dominated by lightweight soul and what was left of disco.

Success came quickly: within three years LL Cool J was hip-hop’s biggest star; Def Jam was home to its most thrilling and innovative group, Public Enemy, there were significant inroads into the pop charts with the Beastie Boys’ multimillion-selling Licensed to Ill, produced by Rubin; and a growing influence on culture in general.

Alongside the flyers, posters and behind-the-scenes photos included in The Last Great Record Label is an old advert from Volkswagen, featuring a Golf with the circular VW badge missing and the slogan: “Designer labels always get ripped off”. The ad, doubly clever in hindsight, cashes in on the fact that, at the time, Beastie Boys fans were swiping the badges to copy the band’s Mike D, who wore the interlocking VW symbol on a chain round his neck as a joke, mocking the trend for rappers to sport heavy gold neck wear. Approval from hip-hop’s audience kept Volkswagen relevant – a boon for the car company, then best known for the first incarnation of the Beetle, a symbol of the 60s counter-culture that was long past its sell-by date. Soon other big businesses also moved to cash in on hip-hop’s popularity.

As for music’s impact in Britain, Def Jam’s package tour of 1987 is considered something of a landmark moment. On the bill were Public Enemy, LL Cool J and Eric B & Rakim (not on Def Jam but managed by Simmons). The beginning of Public Enemy’s London set – air raid sirens and the words “London, England! Consider yourselves warned!” – would be recorded for posterity, opening the group’s brilliant, intensely political second album, It Takes A Nation of Millions to Hold Us Back. “You had the so-called British invasion of America by the Beatles 20 years before, and we thought of this as the reverse, a hip-hop invasion of Britain,” says the group’s frontman Chuck D. “We had a mission, which was not to match the hype, but exceed it.”

Seeds were certainly sown. A year later, Russell Simmons’s management arm would sign up one of the few prominent UK rappers of the era, the late Derek B. And Nation of Millions was the first Def Jam release bought by a young DJ Semtex, who now fronts BBC Radio 1Xtra’s flagship hip-hop show. He insists that, “Public Enemy educated me as much as the school system”. Semtex also helped set up the UK arm of Def Jam in the early 1990s, working in A&R. But there would be no British Public Enemy: big-selling Tim Westwood compilation albums were more in tune with British tastes.

Nevertheless, Semtex’s first signing, Fatman Scoop’s party anthem Be Faithful, topped the singles chart, and he gained an insight into the label’s longevity. “They have an intensive approach to business, loyalty to artists, and respect for hip-hop culture,” he says. “No one wants to be responsible for the demise of the heritage that’s been created.”

Of course, there have been bumps in the road. Rick Rubin left as early as 1988, although he’s now so revered as a producer that in 2007 he was named one of Time’s most influential people on the planet.

The Beastie Boys departed after one album, and the mid-1990s, when gangsta rap and Los Angeles ruled, were not kind to an operation with such deep New York roots. But a late-90s alliance with Jay-Z was another masterstroke. He was even the label’s president for a while, taking Kanye West and Rihanna under his wing before departing two years ago.

Hip-hop itself has changed enormously of course, becoming mainstream enough to be referenced by the US president. Although, according to Russell Simmons, that doesn’t mean it’s gone soft. “It still has power,” he says. “You still hear people say, rappers are so sexist, they’re so gangster. They’re not. They’re mirroring what’s going on in society, some of it positive, some negative. Which is what poets have always done down the ages.”

Leave a comment below to let us know what you think.